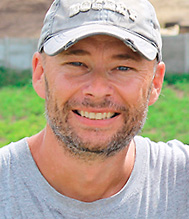 Although I’ve lived in Quebec, Ontario, Manitoba, Alberta, British Columbia and Haiti, I did most of my growing up as far north as the roads can take a person, in the isolated community of Cochrane.

I remember driving 8 hours south to see my first rock concert: Alannah Myles, Kim Mitchel, Motley Crue, and Van Halen at Molson Park in Toronto. That moment in time changed my life and I was hooked on what the rest of the world had to offer. Since then, I’ve been fortunate enough to see Van Halen, front row center with backstage pass, in Toronto, U2 in Seattle, Motley Crue in Edmonton, Bon Jovi in Vancouver, and Aerosmith in Dallas, to name of few of the highlights. Music has always been a large part of my life and doubly so while writing. Rarely will my wife find me tucked away with my laptop feverishly writing the next book without my headphones on.

When I was 15, I was diagnosed with Recurrent Idiopathic Pericarditis. Overnight, I went from a typical teenager with great parents, growing up in Cochrane—snowboarding, mountain biking, off-roading, and playing any sport with a ball—to being laid up in bed for weeks at a time in terrible pain. The pericarditis would come back a few times a year throughout my teenage years and for a while, I lost my way. I remember being rushed via air ambulance to Toronto and managed to ask my mom to pack my Sony Sport Walkman along with my briefcase with 30 tapes. (If you don’t know what a tape is, ask your parents.) My Ante Linda had sent along a book for me, The Sword of Shannara, by Terry Brooks. I wasn’t a reader at all back then, and the book was intimidating in its size. When I finally cracked the cover, my world was forever changed. I went from rotting in a hospital bed to running off with the Omsfords in a journey that changed my life (I had the privilege of telling Terry the story a few years back and that was a pretty cool moment). It’s funny looking back with 20/20 hindsight because at the time, life was really hard, but what I didn’t realize was that the downtime cause by the Pericarditis was required in order to introduce me to the writer’s life.

After finishing the original Shannara Trilogy, I started writing. I can’t remember when exactly I started or why, but I do remember having a plethora of ideas as I tended to do a lot of daydreaming in school. To this day, if I don’t get my ideas on paper regularly, I feel out-of-sorts, I suppose like a dam would feel as the waters rise against it. My friend, Klint, has read a lot of my earlier stuff and somehow he could always find something positive to say about those wordy animals. Now I may be slow but, I’m worth waiting for, and it took me decades to begin scratching at the door of a good story. Along the way, I had the good fortune of meeting bestselling author, Mike Mason, and we became friends. He offered me so much wisdom and encouragement along the way that helped me to develop my craft while always challenging me to do better.

In 2010, I joined my friend Damien on a trip to Niger, Africa, with a medical mobile team comprising of doctors and dentists. I’m neither, but they needed help driving the 4×4’s through the desert and setting up camps, etc.—that I can do, so off we went. (See dad, I told you that beating up my old Toyota 4×4 in the bush wasn’t part of a misspent youth.) Sleeping under the African sky on a cot was a memory I’ll never forget, but seeing the abject poverty that millions of people live in changed my life to no end. We teach our kids that giving is better than receiving, but the vast majority of us spend most, if not all, of our incomes on ourselves. As a family, we were done living for ourselves and that decision changed the trajectory of our lives.

In 2013, I joined my friend Randy on a trip to Haiti to visit the site where the Haiti Children’s Aid Society was planning the construction of a new orphanage. This trip changed my life, and upon my return, I joined the board of directors for HCAS. Then in 2014, I sold my practice in Edmonton, and moved my little family to Mirebalais, Haiti, to assume the position of Field Director, to oversee the construction of the massive project.

In the end, the project was a terrific success all thanks to my friend Tim, who spent thousands of hours on the phone helping me to understand the complex issues I was coming against daily. We laughed and cried together as my little family struggled with the daily challenges of living in the poorest country in the Western hemisphere. Behind the scenes, my wife had taken ill and a few weeks before we finished the construction, she took a turn for the worse and we had to fly her home and straight to the hospital she went. Shortly after her return to Canada, my son Ty fell ill and the day after we moved the kids into the new orphanage, I had to return home with Ty and straight to the hospital he went.

Life doesn’t always end up the way we think it should, but isn’t that part of the ride? Hard lessons are sometimes necessary to prepare us for the next big adventure as we journey towards leaving this world a little better off than when we arrived. The year we spent in Haiti was the hardest year of our lives by a country mile, but the trial by fire has shaped us in pretty incredible ways.

My greatest challenge as a writer stemmed from the fact that I was such a big picture thinker, and conversely, struggled to no end with the countless small details of flushing out a great story. Shortly after returning from Haiti, I reconnected with Darryl Frayne, an old friend and fellow writer who is very detail oriented, where I’m all about the arc of the story. We started working together and the magic that unfolded was…well, I suppose you can be the judge.

Writing has always been such a large part of my life as I crave adventure and getting to set the rules is quite enjoyable thank you very much. When I’m not writing, I tend to surround myself with some fellow adventures which creates a breeding ground for both great ideas, and for living. I call the Okanagan Valley in British Columbia home, and spend a lot of my time on my F700GS, riding the backcountry to find out what’s around that next corner.

In the in-betweens, I married my high school crush back in 1998 after taking a knee on a peer overlooking the Gulf of Mexico, in Galveston Texas. Joy has added all manner of color to my life and to this day, makes life an absolute thrill ride. She came from a terrific family and it was her father who introduced me to THE Builder, and the Bible, introductions that changed my life. When our son, Ty, came along in 2004, well, a father could not ask for a better son. I love viewing the world through his animated features and I can only imagine how he is going to leave the world better off than when he arrived. I have a long list of people that have helped me along the road of life, but none more than Joy and Ty. I love you guys “to the moon and back,” as Joy’s mom likes to say. 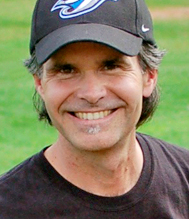 As far as I can remember, my journey into writing began when I was about 11 or 12 years old. I had always enjoyed stories, so I experimented with some comic-book style writing. I would draw my characters in small boxes, complete with talking bubbles for dialogue. Who knows? If only I had developed my drawing skills, I might have become a graphic novelist!

But that was not to be.

About a year later, I wanted to read The Lord of the Rings. This was the early eighties, and my family was pretty conservative, so I was discouraged from reading it until I got older. Instead, I was directed to the Chronicles of Narnia series. During my high school years, I devoured them (between required readings).

More than ten years passed since my introduction to the classic work of JRR Tolkien. Finally, after university, I read The Hobbit and The Lord of the Rings. Geeky side note: my wife and I read aloud together on our honeymoon. How’s that for fantasy romance!

After Tolkien, I entered the world of Shannara, created by Terry Brooks. I’m still there. As Shane has said of his experience, the novels of Terry Brooks have changed my life. I’m very grateful for Mr. Brooks’ creativity.

It was actually Brooks’ Landover series that sparked my initial foray into fantasy writing. On a warm summer afternoon on Vashon Island, WA, I was walking through the woods, wondering what it would be like to stumble into the magic kingdom of Landover. The setting was perfect (although it was the West coast instead of Eastern US). Vashon Island, a short ferry ride from Seattle (and, incidentally, one of the settings in Brooks’ Word and Void series), provided the perfect blend of mystique and otherworldliness to begin my first attempt at writing fantasy.

I’m not sure what happened to those pages but I can picture the woods and the path that led to my adventures in Landover.

Before that story could develop further, my writing ventured down an academic rabbit trail for about ten years as I worked on a Master’s degree. While I loved the research and writing process, I was not interested enough in the topic of my thesis to pursue it (early American church history—surprised?).

That’s when I met Shane Trusz. We started talking about writing in general, about fantasy and Terry Brooks more specifically, and then about working together on a story Shane was writing.

It’s been a long and winding journey for Shane and I into and across The Fourwinds, but I’m pretty excited to be on this path. It’s a journey I would not likely have been able to do without the “big picture” story Shane conceived. I’m grateful for the diversity of writing and marketing skills we both bring to this project.

I hope you’ll enjoy the journey across The Fourwinds. If you could listen in on the conversations Shane and I have about the full story, you’d know that this book is just the beginning.

I also hope that you’ll not take the gift of literacy for granted, knowing that when you buy a copy of any Maidstone Chronicles books, you’re helping a child in Haiti learn to read and write. Get a book; Give a book.