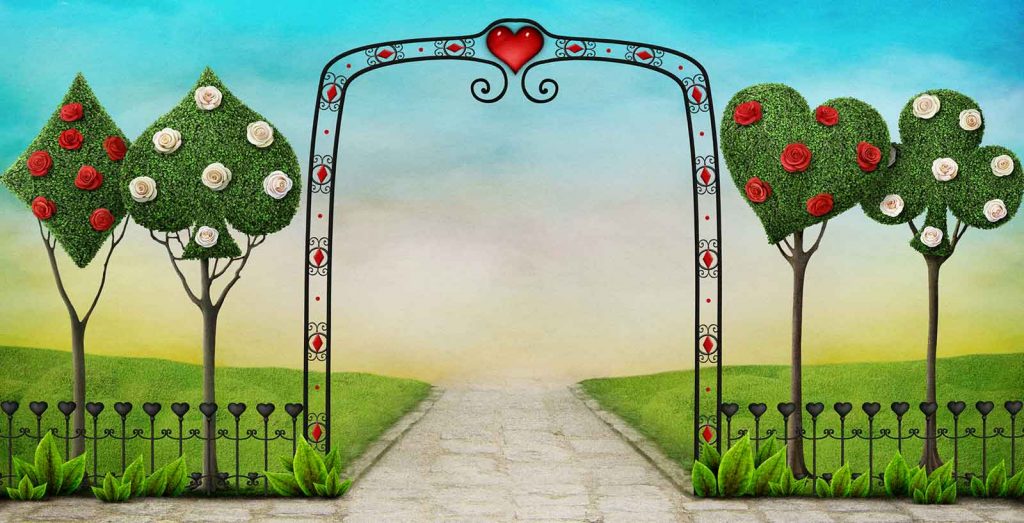 Portal fantasy books have captured the imagination of readers for many generations. To venture through a mysterious gateway into another world or dimension seems to be a great way for many readers to escape the pressures or monotony of everyday life.

And maybe even learn something about everyday life in the process.

Classic portal fantasy books such as Alice in Wonderland and The Wonderful Wizard of Oz have influenced scores of authors (and readers) right up to the present day. Some titles are regularly shelved under the portal fantasy subgenre, but others contain only a subtle reference to a portal. I’ve already written about a few recently published portal fantasy books. And I’ll likely write about more of them in the future!

Of course, the idea of a portal is not limited to the fantasy genre. There are many science fiction (and even horror) books with a portal from our world into another. Some books (like Madeleine L’Engle’s Wrinkle in Time Quintet) might be considered “science fantasy.” Whatever the subgenre, classic portal fantasy is a common trope within the larger speculative fiction genre.

Recently, I was looking on Amazon for some classic portal fantasy titles and I found some very interesting reprints of classic editions. These are definitely going on my wish list.

Originally published in 1865, this classic story has been retold numerous times, and influenced probably hundreds of other stories.

From the synopsis:
“This edition is derived from an 1869 reprint of the original 1865 text, making it almost as close as you can get to the original! Imagine sitting down with your children or grandchildren and reading this classic almost exactly as it would have been read more than one hundred years ago.”

The Wizard of Oz

Originally published in 1900 as The Wonderful Wizard of Oz, this illustrated children’s classic story has also been retold numerous times and influenced many authors. And of course, who hasn’t seen the classic movie?

From the synopsis:
“Influenced by the Brothers Grimm and Hans Christian Andersen, L. Frank Baum created this classic story and fantasy using the dream of young Dorothy on her journey home to demonstrate the theme of good vs. evil. Throughout her adventure, she encounters several newfound friends: a scarecrow, a tin woodman, and a cowardly lion. They traverse the land of Oz together by following the famous yellow brick road to the stunning Emerald City. Though they encounter surprises along the way, what they find in the Emerald City shocks them.”

The Wizard of Oz – Complete Set

This is a more recent collection, but I couldn’t resist including it for those who are curious about Mr. Baum’s sequels.

From the synopsis:
Volume 1: The Wonderful Wizard of Oz, The Marvelous Land of Oz, Ozma of Oz
Volume 2: Dorothy and the Wizard in Oz, The Road to Oz, The Emerald City of Oz
Volume 3: The Patchwork Girl of Oz, Tik-Tok of Oz, The Scarecrow of Oz
Volume 4: Rinkitink in Oz, The Lost Princess of Oz, The Tin Woodman of Oz,
Volume 5: The Magic of Oz, Glinda of Oz, The Royal Book of Oz

After the success of his play, Barrie finally published his popular story as a novel (Peter and Wendy) in 1911. The cover of this reprint may not look like the original, but the text is, and there are some original illustrations by Francis Donkin Bedford.

From the synopsis:
“Included in this volume are the famous novel — Peter and Wendy (1911) — about the “boy who never grew up” and his adventures in Neverland, as well as a lesser-known prequel entitled Peter Pan in Kensington Gardens (1906), which tells the story of Pan’s early years in London. This lively volume weaves a tale that is universally relatable and wildly popular for adults and children alike.”

Yes, I did it again. Sorry, but I couldn’t resist showing off this new edition as well. This is actually the edition on my personal wish list. Check out the sample images on Amazon – wow.

From the synopsis:
“Peter Pan is packed with a lush array of colorful illustrations and interactive removable features, including a detailed map of Neverland, a croc o’clock with hands you can rotate to tell time, Peter’s shadow, and more. Beautiful and captivating, filled with breathtaking artwork, this stunning book is sure to become a treasured keepsake for fans of all ages.”

Lion, the Witch and the Wardrobe

What classic portal fantasy list would be complete without the Chronicles of Narnia? The Lion, the Witch, and the Wardrobe was originally published in 1950 and it’s popularity has yet to fade.

From the synopsis:
“This hardcover edition, featuring the original jacket art and black-and-white illustrations by Pauline Baynes, allows readers to celebrate the book that started it all.”

“It was a dark and stormy night…” Another modern classic from 1962, often cited as a childhood favorite. I find it interesting that Disney has picked up Alice in Wonderland, Peter Pan, The Chronicles of Narnia, and now A Wrinkle in Time.

From the synopsis:
“Fifty years ago, Madeleine L’Engle introduced the world to A Wrinkle in Time and the wonderful and unforgettable characters Meg and Charles Wallace Murry, and their friend Calvin O’Keefe. When the children learn that Mr. Murry has been captured by the Dark Thing, they time travel to Camazotz, where they must face the leader IT in the ultimate battle between good and evil―a journey that threatens their lives and our universe. … This special edition has been redesigned and includes an introduction by Katherine Paterson, an afterword by Madeleine L’Engle’s granddaughter Charlotte Jones Voiklis that includes photographs and memorabilia, the author’s Newbery Medal acceptance speech, and other bonus materials.“

I know this book is not that old (1987) but it amazes me that the original cover art edition is still available. Get it while you can!

From the synopsis:
“After Ben Holiday purchased Landover, he discovered the magic kingdom had some problems. The Barons refused to recognize a king and the peasants were without hope. To make matters worse, Ben learned that he had to duel to the death with the Iron Mask, the terrible lord of the demons–a duel which no human could hope to win….”

Don’t worry: if you’re not in Griffindor, you can get this edition in Hufflepuff, Ravenclaw, and Slytherin themes. This is a collector’s item so it’s only available in book one (for now). It looks like Bloomsbury will be publishing the entire 20th anniversary set eventually – Chamber of Secrets House Edition is due in June 2018. Of course, if you don’t have the series and can’t wait, this paperback set is a great choice.

From the synopsis:
“For the true devotee of the series, this collector’s edition is a must. Gold foil stamping on an embossed leather cover marks the book as a bona fide treasure. Most exciting of all is a previously unpublished sketch of Harry by Rowling herself!”

This is just a sampling of some classic portal fantasy books available. And yes, I’m biased; these are some of my personal favorites. What are yours?